"That's it, I'm claiming a forfeit. Get off my beach!"
―Wayne the Challenger

Wayne the Challenger is a male elephant seal who fights with Bryan and a minor character in Happy Feet Two. He is voiced by Lee Perry.

In Happy Feet Two, Wayne is first seen challenging Bryan. Their fight is interrupted by the arrival of Mumble and Erik. As Bryan talks with them, Wayne grows impatient, trying to claim a win by forfeit.

After "Erik's Opera", he later joins Bryan and the other Elephant Seals on breaking down the Doomberg to free Emperor-Land.

Wayne is a grey elephant seal with brown eyes, a grey belly, and grey nose.

"What you looking at?" 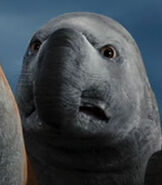 Add a photo to this gallery
Retrieved from "https://happyfeet.fandom.com/wiki/Wayne_the_Challenger?oldid=23014"
Community content is available under CC-BY-SA unless otherwise noted.