Sven falling off the glacier 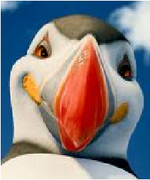 Close up of Sven

Sven flying back from the tornado

A beanie man sawing Sven as he is on a small iceberg in "The Mighty Sven".

Two aliens sending Sven on a basket with a blaket inside

People as they wash Sven on the sink

A beanie holding Sven on the boat

Sven's close up in "The Mighty Sven"

Sven flying to his fans

And I dedicate full-time...to the creatementof a new Adélie Land!

Sven finding out a earthquake on Adélie-Land

"All rights reserved. Copyright me."

Sven finding out that the ocean has frozen over significantly

Sven watching Ramón as he is doing Sventhink

Sven telling Erik to believe in himself

If you want it, you must will it, if you will it, it will be yours

Sven as he watches the chickens being roasted

"There's a guy named Lars Gavunsterson. I used to dance with his sister Girta, and I..."

"I'm just a little puffin bird, run out of proof"

Sven's close up with bubble booger

Sven listing and flying to Erik

Sven being reaction to the snow coming out of the Doomberg

Sven saying "The Svend" at the ending of the credits in Happy Feet Two.

Sven with Erik before leaving Adelie-Land by Richard Pritchard

Sven waving in a twilight of Adelieland by Richard Pritchard
Add a photo to this gallery
Retrieved from "https://happyfeet.fandom.com/wiki/Sven/Gallery?oldid=20802"
Community content is available under CC-BY-SA unless otherwise noted.