Nestor with the Amigos with Lovelace watching Mumble finding the Ailens.

Nestor (close right) with the Amigos, sing a sad song after Mumble rejects Gloria's attempt to join them on their dangerous journey in Happy Feet 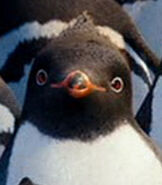 Close up of Nestor

The Amigos, Erik, Atticus, and Bo cheering for Sven

Nestor (left) in a wallpaper of the amigos in Happy Feet

Nestor (right) in another wallpaper of the Amigos

"Man, this guy is so accidentally cool."
Add a photo to this gallery

The Amigos with Erik, Atticus and Bo looking at Carmen by Richard Pritchard
Add a photo to this gallery
Retrieved from "https://happyfeet.fandom.com/wiki/Nestor/Gallery?oldid=15269"
Community content is available under CC-BY-SA unless otherwise noted.