Mumble is the main protagonist of Happy Feet and Happy Feet Two. He is a male emperor penguin who is the son of Memphis and Norma Jean, the husband of Gloria, and the father of Erik. He is unique in that he is the only emperor penguin to not have a heartsong, and the first to be able to tap dance.

Mumble is first seen as an egg, which is handed off to Memphis by Norma Jean. During his incubation, he is dropped and briefly exposed to the environment's sub-zero temperatures, before being picked back up. This event may contribute to his different mannerisms later on in the film.

Memphis worries when his egg does not hatch when The other Penguins' do. A friend of his, Maurice, comes by with his daughter, Gloria, to see what had happened. Gloria spots the egg, taps on it and hears a response from inside. Two feet break from the egg and as they begin to walk off down a snow bank, Gloria playfully addresses the egg as "Mr. Mumble" thus naming him when he hatches.

Mumble is shown to be an excellent dancer from the moment he hatches, though everyone fails to see this and assume that there is something wrong with his feet. While Mumble attends school, he is discovered to be lacking a Heartsong, which is said to be very important for being a proper penguin. In fact, he has a terrible singing voice, which does not improve despite him being sent to Mrs. Astrakhan, the best singing teacher. As a result Mumble is teased, and his mother worries that he will never find a mate and spend his life alone. But a defiant Memphis objects, saying that their son will grow up to be normal after strengthening his "singing muscles".

Having his dancing being looked down upon, Mumble finds a place to dance where no one can see him. He is discovered by and escapes from a group of hungry skuas, one of which who claims to have been abducted by aliens. Intrigued by the thought of aliens and worlds beyond his own, Mumble becomes lost in his imagination instead of paying attention in school.

At the graduation party, Mumble's friend Gloria sings "Somebody to Love" for everyone, but Mumble gets so caught up with the music, that he himself tries to sing. His out-of-tune singing, causes the other penguins to chuck him out.

The next day, Mumble is sleeping on an ice float, initially, he though it was his friends, until he started being chased by a leopard seal. The leopard seal chases him, and he eventually ends up where the Adélie Penguins live. He finds a group of penguins who call themselves the Amigos, who are led by Ramón. They taunted the leopard seal, until he gave up and flopped away.

The Amigos show Mumble where they live. Everyone was singing and dancing, and they use some of their newly learned tap dancing to impress some female penguins, to no avail. Mumble notices that some of the penguins there were carrying around rocks. He mistakenly assumed that the male penguin was going to eat it, until the Amigos told him it was a lovestone, for getting a mate.

Mumble and the Amigos are walking and dancing, when the piece of ice Mumble was dancing on breaks, and he falls down a steep mountain. The Amigos note, "This guy is so accidentally cool!" and jump after him. After sliding down the icy mountain, the Amigos and Mumble fall into the ocean, where a piece of ice breaks off and releases a bull-dozer, which intrigues Mumble. The Amigos advise him to talk to Lovelace, a guru penguin. Lovelace has plastic rings from a six-pack-soda-can around his neck, which he claims the mystic beings gave to him. After asking many questions, and not having any answered, Lovelace decides to stop answering questions for the day.

Mumble and the Amigos head to Emperor-Land where it is mating season. Mumble tries to impress Gloria but he knows he can't sing, so Ramon hides behind Mumble and sings to Gloria. She doesn't fall for it and at first rejects him, but when he dances to her heartsong, she realizes they are meant for each other, and many other penguins dance with them. Unfortunately, the elders see the penguins' antics and Noah banishes Mumble for not changing his ways. He returns to Lovelace now determined to find out information about the fish shortage and wants to speak with the "aliens". After discovering that his talisman was never given to him by a mystic beings, and that Lovelace is suffocating, he goes to find the aliens for help. Mumble, the amigos, and Lovelace travel far and they reunite with Gloria, who Mumble convinces to leave for her safety, and they also meet elephant seals who warn them of the "alien annihilators". When they reach the Forbidden Shore, killer whales attack, and Lovelace gets his talisman off his neck in the process.

Fishing ships come to the forbidden shore and the penguins watch them plunder fish. Mumble follows the ship leaving his friends behind. He eventually washes up on a beach and gets put in a zoo where he's surrounded by humans who can't understand his cries about the fish. After three months, a little girl communicates with Mumble by tapping on the aquarium glass and Mumble responds by dancing where his tap dancing attracts worldwide attention. The humans return Mumble to Emperor-Land where he reunites with Gloria, the amigos, and his parents. He convinces half of the penguins to dance for the humans, (the other half chant with the elders in defiance) who arrive in a helicopter. Soon all the penguins dance for the humans, who take footage of them and the United Nations decide to protect the penguins' food supply.

In the end all is well. Mumble gets back together with Gloria and becomes a hero. All of Emperor-Land dances with Mumble. As a side note, a chick dancing in the end of the film is said to be Mumble and Gloria's child Erik in Happy Feet Two.

In Happy Feet Two, Mumble was now mated with Gloria and has a son named Erik. He is first seen at the Opening Medley when he was tap dancing with his son. Then, Gloria was dancing and coming to Mumble and he faced the other way. He tap dance to Gloria as the emperors continue dancing. He first asks Erik about dancing together. But Erik falls and get embarased by the other chicks. Erik faults his father Mumble for making him join the dance. Erik, with his two friends, Atticus and Bo, follow Ramón to Adélie-Land. This makes Mumble worried about all of them.

Then Mumble goes to Adélie-Land to search for the kids. He finds them with the Amigos and their leader Ramón. Mumble is forced to bring the kids to home. Erik, who is reluctant to go, still has a "penguin" named Sven in his thoughts and almost forgets his father.

On the way home, Mumble meets an elephant seal named Bryan. Bryan blocking the path across the fissure and he doesn't want to back up away from the crossing so Mumble can go home. Bryan then falls and brings the crossing with him. Mumble saves Bryan after seeing his children. After he saving his life, Mumble, Erik, Bo, and Atticus continue their way to Emperor-Land.

Things get worse when the world is shaken by powerful forces. Emperor-Land is trapped by a massive glacier of ice and snow. Mumble asks Bo to bring as many Adélie penguins as she can. The Adélies arrive with their "leader", The Mighty Sven. Mumble and Sven want to bring Erik's attention to themselves to prove one of them can save Emperor-Land. Mumble saves his home by bring the elephant seals to "tap dance" on ice, making enough snow and ice fall to create a sort of stairway to the top of the glacier.

In this 30-second Happy Feet short, included with the Movie disc, Mumble starts off looking at his reflection in the water. Memphis shows up and begins to juggle Mumble as one would a Soccer ball and proceeds to kick him off into the water some distance from the shore. Memphis seems to enjoy his accomplishment, as he does a little dance and exclaims "Eyy!"

In Happy Feet: The Videogame, Mumble appears as the main protagonist in all levels.

When Mumble is born, he resembles a normal baby Emperor Penguin, except for having bright, blue eyes, as opposed to the brown eyes on everyone else.

During and after his encounter with the Boss Skua, he is seen with a clump of dark feathers on his neck that resemble a light grey patch with a bow-tie.

As a Teen, Mumble looks like a baby penguin. His grey feathers when baby appear and closing half of his body. But still has light blue eyes, Black and white feathers, and normal emperor penguin beak and feet. But he has a bow in front of his neck and has three black spots on his leg feathers that give the appearence of spats. His grey feathers resemble a vest.

When he matures into a young adult, his baby feathers have failed to shed, but he has mostly molted near the end of the film. He has a split tail from being bitten by a leopard seal. The yellow feathers on his neck resemble a bow-tie as well.

In Happy Feet Two, Mumble regains his baby feathers, black and white feathers, normal beak and feet, light blue eyes, and bow in front of his neck. But there is some differences, he also has a brighter tail, feathers and eyes. The reason for this is most likely to keep his trademark look.

His difference in appearance from other Emperor Penguins (along with his inability to sing) may be interpreted as birth defects, since he was dropped as an egg.

Mumble's plumage resembles a tuxedo with spats, formal clothing for men that's associated with the traditional tap dancer image, made popular by well-known dancers, like Fred Astaire. The most notable feature of Mumble's "outfit" is the bow tie-shaped mark on his chest, which is gray as a chick and yellow as an adult. His adult plumage sports markings on his feet that resemble spats, and white lines on his flippers resembling cuffs. While Mumble is escaping the hungry leopard seal in the original film, it splits his tail in half, making it resemble coat tails. 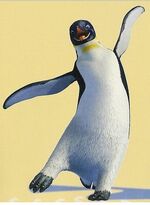 Several Happy Feet books depict Mumble without his downy feathers by the climax of the story. This is because until late in the first movie's production, it was intended for Mumble to lose his down feathers during his pursuit of the fishing fleet. However, it was decided that Mumble would keep half of his juvenile down throughout the story, to make him different to the other emperor penguins.

Mumble's black feathers on his upper chest resemble a black tuxedo, and the white stripes on his flippers resemble cuffs.

Mumble is shown to be kind and friendly, as well as shy, but he can also be extremely brave when a situation calls for it.

This is shown when he retrives a fish he caught for Gloria from several skua, and when he chases an alien ship into the unknown in hopes of finding the fish that are being taken from his home.

In Happy Feet Two, Mumble is very caring towards his new son, Erik, although the two have trouble seeing eye-to-eye and gaining each other's favor throughout the sequel.

Frustrated, Mumble even yells at Erik at one point, which upsets Erik greatly. By the end of the film, though, the two seem to have resolved their conflicts.

Retrieved from "https://happyfeet.fandom.com/wiki/Mumble?oldid=19839"
Community content is available under CC-BY-SA unless otherwise noted.