Mumble, with the support of his Amigos, asks the all-knowing Lovelace about the 'aliens'

"And now, your question."

Lovelace, who is choked by the plastic Six-pack rings around his neck which are way too tight for him, resorts to charades to make himself understood by Mumble and the Amigos

The Amigos with Lovelace watching Mumble finding the Ailens.

Lovelace blocks his friends from the killer whales 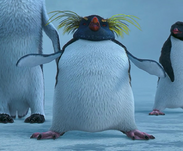 Lovelace without his talisman

"Who could say? Taller than anyone."

"Hey, it's me, Lovelace...formerly known as guru. I'm gonna be telling your story, Happy Feet, long after you're dead and gone!"

"ls equal to the love...you make."
Add a photo to this gallery

Lovelace with his rainbow sweater

He was the last of a noble penguin race. Whose world collapsed at a rapid pace.

Lovelace in a oil spill.

Humans using a dryer to clean Lovelace in Researchers Aurora.

A Magellanic Penguin (on the right near Ramón) talking to Lovelace after Sven reveals himself that he is a puffin.

The Little Penguins as they help Lovelace to get to the water to find the alien ship.

Lovelace (close) with a rainbow wig and talking to Mumble 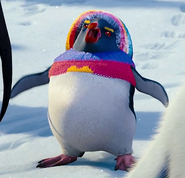 Groovin' Lovelace from Burger King
Add a photo to this gallery 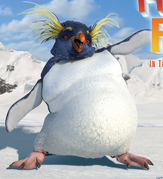 Lovelace in a promotional poster of Happy Feet Two

Lovelace as he appears in Happy Feet Two: Erik's Adventure

Lovelace in Happy Feet: The Videogame (GBA Version)
Add a photo to this gallery

Lovelace digital render concept art
Add a photo to this gallery
Retrieved from "https://happyfeet.fandom.com/wiki/Lovelace/Gallery?oldid=21452"
Community content is available under CC-BY-SA unless otherwise noted.