The killer whale (Orcinus orca), also referred to as the orca whale or orca, and less commonly as the blackfish, is a toothed whale belonging to the oceanic dolphin family. They are minor antagonists of Happy Feet and cameo characters of Happy Feet Two.

In the Real WorldEdit

Orcas, or killer whales, are the largest of the dolphins and one of the world's most powerful predators. They feast on marine mammals such as seals, sea lions, dolphins and even other whales, employing teeth that can be four inches (ten centimeters) long. They are known to grab seals right off the ice. They also eat fish, squid, and seabirds.

Though they often frequent cold, coastal waters, orcas can be found from the polar regions to the Equator.

Killer whales hunt in deadly pods, family groups of up to 40 individuals. There appear to be both resident and transient pod populations of killer whales. These different groups may prey on different animals and use different techniques to catch them. Resident pods tend to prefer fish, while transient pods target marine mammals. All pods use effective, cooperative hunting techniques that some liken to the behavior of wolf packs.

Whales make a wide variety of communicative sounds, and each pod has distinctive noises that its members will recognize even at a distance. They use echolocation to communicate and hunt, making sounds that travel underwater until they encounter objects, then bounce back, revealing their location, size, and shape.

Killer whales are protective of their young, and other adolescent females often assist the mother in caring for them. Mothers give birth every three to ten years, after a 17-month pregnancy.

Orcas are immediately recognizable by their distinctive black-and-white coloring and are the intelligent, trainable stars of many aquarium shows. Killer whales have never been extensively hunted by humans, but killer whales have been known to attack humans, both in the wild and in captivity, and very few killer whales have killed humans.

In the Happy Feet franchiseEdit

In Happy Feet, two orcas help Lovelace escape the plastic rings around his neck, which have been choking him. First, one rises up out of the water, and seeing how Lovelace is trapped, the killer whale and another proceeded to "attack" by getting Lovelace stuck in a bell chain and then throwing it around until he slips out of the plastic rings.

In the sequel, a killer whale appears as a cameo when he hits an iceberg from a polar bear and Sven as part of the song "The Mighty Sven to (presumably) save the two and get them to more land.

In the 3DS/DS version of Happy Feet Two: The Video Game, a killer whale appears as a boss. 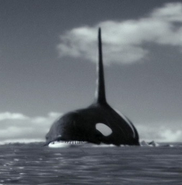 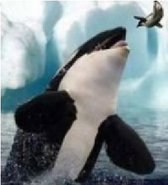 Add a photo to this gallery
Retrieved from "https://happyfeet.fandom.com/wiki/Killer_Whale?oldid=23050"
Community content is available under CC-BY-SA unless otherwise noted.