For the transcript of this film, see Happy Feet Two/Transcript.

Erik, son of the penguins Mumble and Gloria, is reluctant to try dancing as most of the penguins in Emperor-Land do. His first attempt at dancing ends in humiliation. Erik and his two best friends, Boadicea and Atticus, follow Ramón to Adélie-Land and find that Adélie-Land has been ruled by a God-like "penguin" named Sven. Sven is the only one of his kind in Emperor-Land, he survived the loss of his native fishing grounds (evidently ruined by a warming climate) by his "miraculous" ability to fly (from his appearance and accent, the audience, but not the penguins, can realize that Sven is really a puffin). Erik instantly becomes enamored with Sven, who takes a liking to him. Sven and Lovelace tell the others that they were saved by humans. The two eventually flee and end up on Antarctica, where Sven performs his first miracle by revealing moss to the local penguins. Sven uses his power of "Sven Think" to help Ramón find a mate. Ramón instantly falls in love with Carmen, another Adélie penguin who is uninterested. Mumble follows the chicks' footprints to Adélie-Land and orders them to return to Emperor-Land, but they refuse. Sven sends Erik back to Emperor-Land with Mumble.

Meanwhile, a couple of krill are in the midst of a swarm. Will is an adventurous and existentialist krill determined to discover what lies beyond the swarm. His friend, Bill, reluctantly follows him to ensure his safety. Once separated from the swarm, Will and Bill realize that krill are at the bottom of the food chain, created to be eaten. Inspired, Will ventures out to evolve and "move up the food chain" by eating a real creature instead of being eaten.

Mumble tells Erik that he is unique to the world and that he will someday find his calling, but Erik dismisses his advice. While trying to cross a perilous ice bridge, the penguins encounter Bryan the Beach Master and his two young sons Shane and Darren, who refuse to let the penguins pass. Suddenly the ice gives away and Bryan is trapped in a deep crevice below the ice. Mumble sets out to free Bryan by antagonizing a sleeping leopard seal until it chases him down. Seeking acceptance from Erik, Mumble is disheartened to learn Erik attributed the feat of courage to Sven Think. Bryan returns to the Elephant Seal beach.

When the penguins return to Emperor-Land they discover that a large iceberg has trapped the Emperor Penguin population below large walls of ice. Bo ventures out to Adélie-Land to recruit the help of Ramón, the Amigos and the Adélie penguins to bring fish to the doomed Emperor penguins. Meanwhile, Mumble, Erik and Atticus deliver meager supplies of fish to the trapped penguins. Erik attempts to deliver a fish to Gloria by flying and nearly tossing himself over the edge of the iceberg. Mumble scolds Erik for his beliefs, saying that no penguin can fly and that none of the Emperor Penguins will be able to escape. Once Erik realizes Emperor-Land is destined to die, he begins to break down. Gloria sends Mumble off to hunt for fish, calming Erik and the rest of the hysterical Emperor-Land. In the process, Bill becomes inspired to create another swarm of krill but Will refuses, preferring to adhere to his new predator lifestyle.

The humans that saved Sven and Lovelace come to Antarctica again to help the penguins find a way out. However, a blizzard approaches and causes the humans to flee and not return. Sven reports that the ocean has frozen over significantly and there is no chance of the humans returning or the Adélie Penguins transporting food over such a distance. Erik urges Sven to teach the penguins how to fly, but Sven reveals that he is not a penguin but a Puffin. He admits that after the loss of Svenland, he was lonely and grew to love the penguins who accepted him as a family. Mumble, after watching snow fall into a crevice between chunks of iceberg, begins to tap-dance on the ice and lead the Adélie penguins in a dance to force snow between the ice and weaken it. The plan works until several chunks break loose, sending Bo, Atticus, and a portion of the Adélies as well as several Chinstrap, Little Blue and Magellanic penguins into the doomed crevice. Erik and Lovelace tumble towards the edge, and Mumble grabs the thread from Lovelace's vest. The thread snaps and Lovelace falls on Sven. Quickly, Mumble and the Amigos pull on the thread that Erik is holding onto and pull him up. Mumble injures his foot and is unable to dance and lead the Adélies. Ramón realizes Carmen is trapped below and, risking his own life, jumps off the iceberg to be with her and professes their love to each other. Sven becomes aware of the dancing and proves himself to be a worthy dancer despite public outcry against him. He leads the remaining Adélies in dance while Erik and Mumble venture off to the Elephant Seal beach.

Meanwhile, Will, weary from the dangers he experienced as a predator on the surface, ventures back into the sea to find Bill, but not before experiencing the penguin's dancing. He is suddenly forced down a crack in the ice and into the sea beneath Emperor-Land. He reunites with Bill and his swarm, who tell him he has the purpose of changing the world and evolving the swarm. Once Bill told the swarm of their position on the food chain and their lives as pure herbivores, they followed him to the safety of the inaccessible ice below Emperor-Land.

Mumble and Erik arrive at Elephant Seal Beach where Bryan is in the middle of a fight of dominance between another large male. Mumble pleads to the elephant seals to help free the Emperor Penguins. Bryan, initially hesitant to return a favor at such a pivotal time of the year, refuses. Erik, however, commends Mumble for his bravery and lectures Bryan for his lack of kindness towards him. The elephant seals travel en-masse to Emperor-Land. The penguins and the seals begin slamming the ice on the beat, joined by Will, Bill and their krill swarm below the ice. Finally, the iceberg crumbles enough for the Emperor Penguins to climb out of the crevice and reunite with their families.

Elijah Wood, Robin Williams, Magda Szubanski and Hugo Weaving reprised their previous performances as Mumble, Ramón, Lovelace, Miss. Viola and Noah. Nicole Kidman and Hugh Jackman make a brief cameo as Norma Jean and Memphis. Also returning for the film are Carlos Alazraqui, Johnny A. Sanchez, Lombardo Boyar and Jeffrey Garcia as Nestor, Lombardo, Raul, and Rinaldo. No other actors repeated their earlier performances. Miriam Margoyles didn't come back for the sequel as Mrs. Astrakhan before she was written out of the sequel. Fat Joe was replaced by Common as Semyour.

Brittany Murphy, who originally voiced Mumble's love interest Gloria, was set to reprise her role and begin recording sometime in 2010, but died from pneumonia and anemia on December 20, 2009. Steve Irwin, who voiced Trev the elephant seal and an albatross, died in a stingray injury on September 4, 2006. Pink and Richard Carter both replaced Murphy and Irwin, and Pink contributed a song ("Tell Me Something Good", also by Pink, was contributed to the soundtrack of the first film), and Brad Pitt and Matt Damon voiced the tiny krill, Will and Bill. Hank Azaria also signed on to voice The Mighty Sven. E.G. Daily, who played young Mumble in the previous film, played the vocals for Mumble's choreophobic son Erik and the daughter of Miss Viola, Boadicea, as well as additional voices. Sofía Vergara appears in the film as a new character. There is a live action scene in the movie as in the first Happy Feet. Mitchell Hicks signed up as the movie's choreographer.

The only mention of a third Happy Feet film comes from an interview, in which director George Miller was asked if he had any plans for Happy Feet Three.

"If you put a gun to my head and said, 'You have to come up with a story for Happy Feet 3,' I’d say shoot me. I would have no idea. I really would have no idea. The stories creep up on you. You just have to allow the stories to come, and then they get in like little ear worms in your head and they won’t go away. If that happens and we’ve got the energy, we’ll do a third one. If it doesn’t happen, it doesn’t happen. That’s the only way you can do it. It has to be authentic. I really wanted to make this film better than the first one. Otherwise, at my age, what’s the point? You really want to make it better. If something comes up that’s really exciting and I can convey that enthusiasm to other people, then there would be a third one."
―George Miller.

The DVD, Blu-ray, and 3D Blu-ray release of Happy Feet Two were released on March 13, 2012 from Warner Home Video. 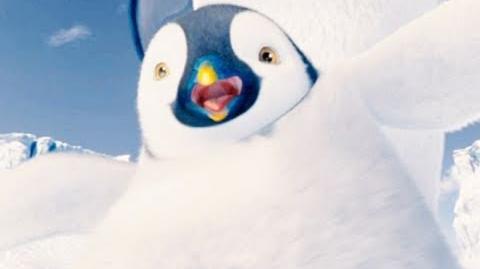 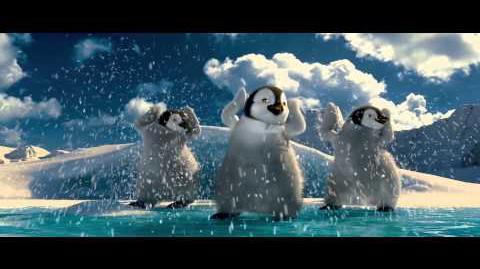 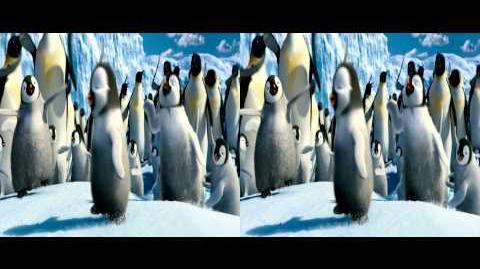 Logo
Add a photo to this gallery 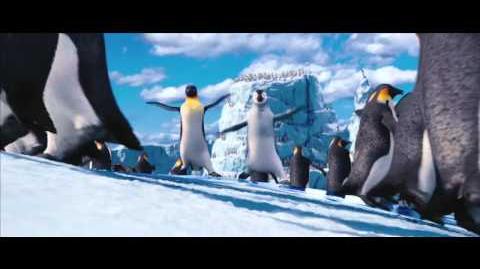 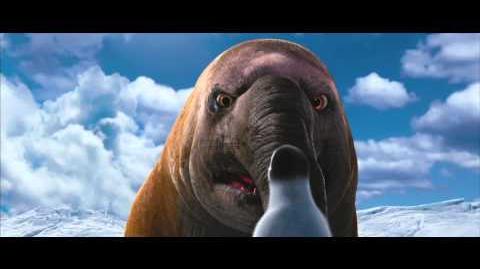 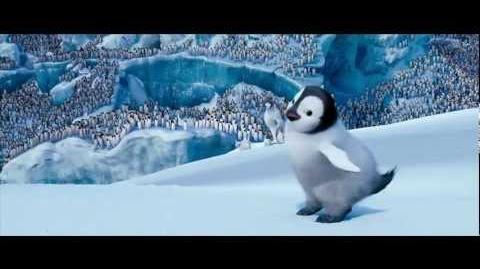 Retrieved from "https://happyfeet.fandom.com/wiki/Happy_Feet_Two?oldid=19416"
Community content is available under CC-BY-SA unless otherwise noted.