Images of the concept arts used for the movie Happy Feet Two.

The introduction of Sven was originally planned to be at sunset to create a fantastical element to the character.

A shot in which Sven was to have an huge shadow over the crowd from a golden sunset making him a hero like character. Sadly the time of day switched to midday and ended this idea.

This shot was meant to have very strong godrays that would play will in stereo. Godrays can add depth and perspective, we planned to them in the foreground, midground and background.

Sven with Erik before leaving Adelie-Land

The song also brings the light of hope.

The Aurora is the light of hope that lights up the night sky.

Bill and Will asleep at night under the aurora, the angle of the light rays from the aurora was used to position highlight the characters.

The biolumenescent jellyfish also needed a look frame for lighters to aim for.

In this sequence it was important to show relationship with the size of the oppressing clouds, shadows and characters.

Skua POV with oversized shadow looking down framed by clouds.

All the skydomes for pre-vis to cover all the times of day. 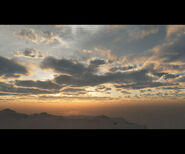 Concept art of the Doomberg crash by Thomas Kayser

The Doomberg's opening storm with more clouds by Thomas Kayser

Add a photo to this gallery
Retrieved from "https://happyfeet.fandom.com/wiki/Happy_Feet_Two/Gallery/Concept_Arts?oldid=20043"
Community content is available under CC-BY-SA unless otherwise noted.