The long-tailed gentoo penguin is a penguin species in the genus Pygoscelis, most closely associated with the Adélie penguin (P. adeliae) and the chinstrap penguin (P. antarcticus).

In the Real WorldEdit

The gentoo penguin is easily recognized by the wide white stripe extending like a bonnet across the top of its head and its bright orange-red bill. They have pale whitish-pink webbed feet and a fairly long tail - the most prominent tail of all penguins. Chicks have grey backs with white fronts. As the gentoo penguin waddles along on land, its tail sticks out behind, sweeping from side to side, hence the scientific name Pygoscelis, which means "rump-tailed".

Gentoos reach a height of 51 to 90 cm (20 to 35 in), making them the third largest species of penguin after the two giant species, the emperor penguin and the king penguin. Males have a maximum weight of about 8.5 kg (19 lb) just before molting, and a minimum weight of about 4.9 kg (11 lb) just before mating. For females the maximum weight is 8.2 kg (18 lb) just before molting, but their weight drops to as little as 4.5 kg (9.9 lb) when guarding the chicks in the nest. Birds from the north are on average 700 g (1.5 lb) heavier and 10 cm (3.9 in) taller than the southern birds. Southern gentoo penguins reach 75–80 cm (30–31 in) in length. They are the fastest underwater swimming penguins, reaching speeds of 36 km/h (22 mph). Gentoos are adapted to very harsh cold climates.

In the Happy Feet franchiseEdit

In the book Happy Feet: Look and Find, a gentoo penguin can be seen dancing as you can find it closer after Mumble has returned home to Antarctica. 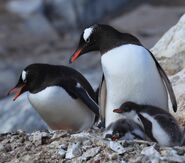 A family on Wiencke Island, Palmer Archipelago, off the coast of the Antarctic Peninsula.

Gentoo colony on Carcass Island in the Falklands

A gentoo penguin (close) in Happy Feet: Look and Find.
Add a photo to this gallery
Retrieved from "https://happyfeet.fandom.com/wiki/Gentoo_Penguin?oldid=15337"
Community content is available under CC-BY-SA unless otherwise noted.