Frankie is a male skua bird and a minor antagonist of Happy Feet.

He is only seen when he is with Boss Skua, Dino and Vinnie landing on Mumble's spot for their lunch. He is also seen dancing with his friends during when Boss Skua is talking to Baby Mumble then, he and his friends begin to chase after Mumble and fell out to the hole. He tries to get Mumble in the hole and failed to get him as he flies away with his friends.

The color of Frankie's feathers are dark brown and he has gold eyes.

Frankie is a sneaky and mean skua. He is loyal to his boss. 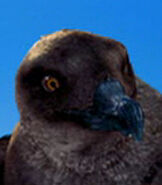 Add a photo to this gallery
Retrieved from "https://happyfeet.fandom.com/wiki/Frankie?oldid=20132"
Community content is available under CC-BY-SA unless otherwise noted.