Francesco is a male skua bird and a minor character in Happy Feet Two. He is voiced by Lee Perry.

In Happy Feet Two, Francesco appear as a minor character. He is first seen flying with Alpha Skua and Brokebeak. As the skuas are landing to another spot of Emperor-Land, he is seen standing next to a skua and Brokebeak. He was talking about the temporary stay of execution when the Alpha Skua hit him with his fin by having him an idiot and says "Thank you".

In the "Papa Oom Mow Mow" sequence, Alpha Skua and Francesco saw Sven flying to give everyone fish, but he hits Francesco by saying to him that he is an idiot. 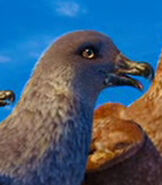 Add a photo to this gallery
Retrieved from "https://happyfeet.fandom.com/wiki/Francesco?oldid=22110"
Community content is available under CC-BY-SA unless otherwise noted.