Dino is a skua bird and a minor antagonist in Happy Feet.

In Happy Feet, he, Boss Skua, Vinnie, and Frankie try to eat Mumble in Happy Feet, when Mumble asks what the thing is on Boss Skua's leg and he says, he was abducted by aliens (humans). He is also seen copying Boss Skua with his friends during when he is talking to Baby Mumble. Then, he and his friends begin to chase after Mumble and fell out to the hole. He tries to get Mumble in the hole and failed to get him as he flies away with his friends. 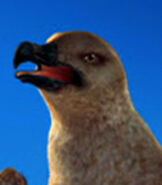 Dino (beside left) in Happy Feet

"Don't start him on that."
Add a photo to this gallery
Retrieved from "https://happyfeet.fandom.com/wiki/Dino?oldid=20933"
Community content is available under CC-BY-SA unless otherwise noted.