The Adelie Chicas are a trio of sassy, female Adélie penguins, briefly seen in Happy Feet. They are impressed by the newly-learned dancing skills of the Amigos. Upon being refused an encore of said skills, they remark that the Amigos are "soft in the head" and walk away. They are voiced by Giselle Loren, Michelle Arthur, and Denise Blasor.

After Ramón said that his amigos with a capital Y are hot, they met the Adelie chicas when Lombardo wanted them to come but the Adelie Chica on the first line said, "l don't think so. Not tonight, baby". But Ramón doesn't want them to be so snooty, booty before he and the amigos sing about what they like. When the chica said, "Where'd you learn that?", Raul chooses Mumble as the big guy when Rinaldo said, "He from out of town", and Nestor says, "He with us". When an Adelie chica tells Mumble to show her his flipping feet, they laugh while Lombardo is saying, "Sorry girls". But Ramón says, "Some other time maybe", and an Adelie chica says to the Amigos and Mumble, "You guys are soft in the head, okay?". When an Adelie chica says, "Let's go", the Adelie chicas begins to leave while the Amigos with Mumble continues to walk in Adélie-Land.

"Where'd you learn that?"

"Do it, baby. Show me those flipping feet."

"You guys are soft in the head, okay?"

The Adelie Chicas leaving from Mumble and the Amigos 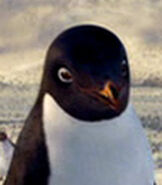 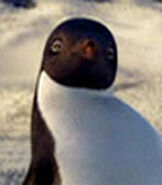 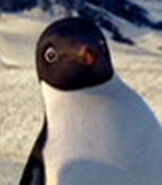 Adelie Chica 3's close up
Add a photo to this gallery

Mumble, and the Amigos, try to impress the Adelie Chicas with their dance moves in Happy Feet
Add a photo to this gallery
Retrieved from "https://happyfeet.fandom.com/wiki/Adelie_Chicas?oldid=20111"
Community content is available under CC-BY-SA unless otherwise noted.